January 24, 2016 sportsmedicineweekly ACSM, Articles, Fitness, Prevention, Science, Training, Treatment Comments Off on Being active may be your fountain of youth 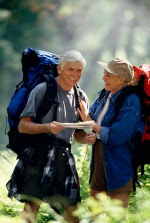 The influence of physical activity and fitness at older ages on changes in telomere length is not well-established. Telomeres are repetitive sequences of DNA placed at the ends of chromosomes that act as “caps” protecting the information on our genome. A small fraction of telomeric DNA is lost with each cell division, as part of the normal cellular process, and when it achieves a critical length, cell stops dividing or die. Therefore, telomere length has received attention as a potential marker of biologic aging. For example, in the Cardiovascular Health Study, shorter telomere length was associated with higher risk of CVD, with age-related disease burden and mortality. Greater physical activity and physical fitness are consistently associated with lower morbidity and mortality from chronic diseases, supporting a potential “anti-aging” effect. Yet, only limited epidemiologic evidence supports an influence on physical activity or physical fitness on telomere length. In this study, researchers suggest that greater physical activity and fitness levels might be associated with slowing the speed at which telomeres become shorter over time— by suggesting that leisure time activity and fitness could reduce leukocyte telomere “erosion” among older adults. These results suggest that being active may have a role in the control of telomere length during the aging process. View the abstract