The soreness in Brent Jurceka?s shoulder was not only causing him terrible pain but getting in the way of his pitching?at his college baseball games.?That?s when he contacted Rush University Medical Center orthopedic surgeon Brian Cole, MD, to schedule a platelet-rich plasma (PRP) treatment, an injection of his own blood, superconcentrated with platelets. Jurceka rested his shoulder for three days after the procedure and on the fourth day, he returned to the mound, pain free. This was the Orland Park native?s second successful experience with PRP. Jurceka?s first was two years prior for a sharp pain in his elbow while he was playing baseball in high school.

?I had heard about Dr. Cole?s success using PRP to treat injuries for some of the Chicago Bulls and White Sox [players],? Jurceka says. ?And I thought, if it worked for professional athletes with minimal side effects, then why not give?it a try???The jury is still out on the effectiveness of this therapy. Healing results from the PRP injections on local professional athletes such as the Bulls? Joakim Noah and Kirk Hinrich, as well as nationally known players like golfer Tiger Woods, basketball?s Kobe Bryant, football?s Troy Polamalu and tennis player Rafael Nadal, has pushed this treatment onto center stage in the orthopedic arena. PRP has become an increasingly more recommended and utilized procedure by orthopedic surgeons for patients who suffer from tennis elbow, torn rotator cuffs, acute ligament and muscle injuries, pain from knee arthritis and bone fractures. It is also used as a supplement in surgery to help with tissue healing. The side effects are usually limited to soreness, stiffness or swelling at the injection site.

According to the American Academy of Orthopaedic Surgeons (AAOS), platelet-rich plasma ?holds great promise.? Chicago-area orthopedic physicians like Cole and J. Martin Leland, MD, orthopedic sports surgeon in the University of Chicago Medicine and Biological Sciences Department, point to its low risk. There are few, if any, side effects and?it is easily accessible because the patient is both the donor as well as the recipient.

To make PRP, blood is drawn from the patient and placed in a centrifuge, a tabletop mechanism that separates the platelets from the red blood cells in a process known as fractionation. Proteins that might normally dissolve in plasma fluid become insoluble in 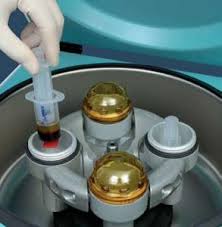 this process and are collected into protein-rich clumps. The entire process takes about ten minutes in the doctor?s office. The plasma is injected into the site of injury, stitched into torn tissues or sprayed onto the site during surgery. Regulatory issues require that PRP be used as a ?point-of-care service,? says Cole. Because of regulatory issues, PRP cannot be stored or reused other than at the time of acquisition and placement.

?Platelets contain more than a thousand different proteins that stimulate cell growth and repair,? says Cole. ?These chemicals are known for their ability to heal injury, reduce inflammation and relieve pain.??Together, they may

have a synergistic effect, which is one of the explanations for why PRP can work so well.??Platelets act as a storehouse for healing. PRP reduces pain more quickly and initiates a swifter healing response than the body would normally do on its own,? Cole explains. PRP has been called by some orthopedists a ?platelet-rich panacea.? He adds, ?For this reason, we have an obligation to rigorously investigate the potential benefits of PRP for various orthopedic processes.?

PRP was first widely utilized in the 1980s by dental surgeons who noted that the upper and lower jawbones weren?t healing well after surgery because there are fewer blood vessels in these areas. In the early 2000s, veterinarians began to use PRP to treat tendon, ligament and cartilage injuries in racehorses. At this time, PRP was also being used by plastic surgeons to reduce wrinkles and otherwise rejuvenate the face, which led to the procedure being dubbed the Vampire Facelift. By the mid-2000s, orthopedic surgeons began to integrate the treatment into their practices. Cole has been utilizing the platelet-concentrating process in his own sports medicine practice for?about five years.?Though PRP appears to be growing in use and acceptance in orthopedic medicine, there are concerns that there?is not enough research to support all of PRP?s claims.

An AAOS report stated that ?Although PRP does appear to be effective in the treatment of chronic tendon injuries about the elbow, the medical community needs more scientific evidence before it can determine whether PRP therapy is truly effective in other conditions.??A 2010 article in the Journal of the American Medical Association (JAMA) concluded that PRP was no more effective than salt water and that there were inconsistencies in the reproduction of results. The article also concluded that ?the injections may have different effects on different injuries.?

To date, there have been no large human trials of PRP, and the procedure has been FDA approved for only a certain number of applications following specific guidelines. Generally, it is not fully understood. Some orthopedists have expressed concern that results can vary depending on the patient, his or her blood and the type of centrifuge used to make the PRP. There are many commercially available centrifuges as well as homemade approaches.?Cole says that physicians who frequently use PRP are looking at customization options for making PRP?to maximize platelet levels and to minimize the inflammatory effects by reducing the number of white blood cells. Most orthopedists agree that while there is still much about PRP that is unknown, it has great potential.

?The biggest myth about PRP,? Leland says, ?is that this is a panacea or a treatment that will replace all surgeries. We are still trying to determine what problems can be helped with the use of PRP; also, what type of PRP is the best.? There are five to ten different systems for making PRP, all of which produce different recipes. We don?t even know what the best concentration is for platelets.? Is it two, five or ten times the normal concentration of platelets in the blood???But,? Leland says, ?PRP can be an important tool for the orthopedic surgeon. As further research is performed, we will learn more about when and where to use it in order to get the absolute best results for our patients.?

Like PRP, stem cells, specifically allogeneic mesenchymal stem cells from umbilical cord blood, are being used for experimental cartilage-repair surgery. But stem cells are used less frequently because of the stricter regulatory environment and a more complex cell-expansion process. In light of this, new techniques to use the patient?s own cells harvested from bone marrow are now more commonly used.?Both Leland and Cole, advocates?of PRP and also some stem cell procedures, say that more extensive human trials are necessary for both treatments to determine their rightful place in medicine.

For now, one of the biggest deterrents for widespread utilization of PRP is its cost. Fees for one injection range from $500 to $2,000, and insurance companies often do not cover the procedure.?For the professional athlete whose livelihood depends on being able to play, combined with their hefty salaries, the cost and PRP?s low risk is well worth it. But for college athletes like Brent Jurceka, who may or may not have a sports-related career, the $500 price tag he paid will likely keep his PRP access to a minimum.