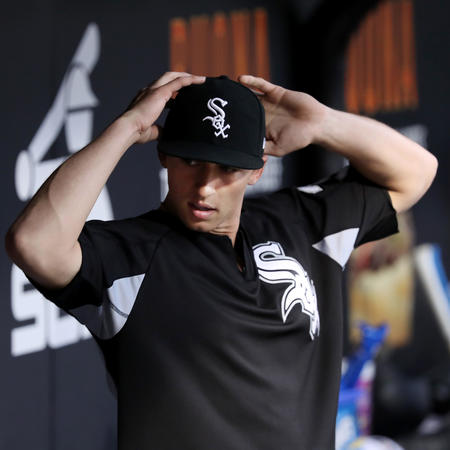 Michael Kopech, the?White Sox?s new Superman, has been cut down by a pitcher?s version of Kryptonite. He is believed to have torn the ulnar collateral ligament in his elbow, which could force him to undergo elbow reconstruction surgery and be sidelined until 2020.

?Unfortunately, in this day and age, it?s a regular part of the game with pitchers,?? Kopech said Friday. ?Personally I never thought it would be something I would be going through. But it?s part of it.?? Kopech becomes the fifth right-handed prospect ranked in the preseason top 100 by?MLB?Pipeline to suffer a serious elbow injury. He joins the Angels? Shohei Ohtani,?Cardinals? Alex Reyes, Ray?s Brent Honeywell and?Reds? Hunter Greene in having their development delayed by Tommy John surgery.

The success rate of the surgery is good, especially for pitchers who haven?t had a previous elbow reconstruction, and the White Sox are confident Kopech will remain a major part of their future despite the specter of major elbow surgery. ?This is by no means the last we?ve seen of Michael Kopech,?? Sox general manager?Rick Hahn?said. ?This is the last we?ve seen of him for ?18 and very likely for ?19, but he?s still going to play a significant role on what we project to be some very, very good White Sox teams in the future.?

Kopech experienced his first rough start in the major leagues on Wednesday night, giving up four home runs to the?Tigers. It was seen as a minor blip until Friday, when orthopedic surgeon Nikhil Verma examined him and found a torn ulnar collateral ligament.? Hahn said an exam Friday ?revealed a rather significant tear in his ulnar collateral ligament.?? He will receive a second op

inion next week but it seems the only question is who will perform the surgery.

This development comes as a shock to both the team and Kopech, who at 22 has been one of the most intriguing young pitchers in baseball. ?It has been a whirlwind of emotions for me in the past couple of weeks obviously,?? Kopech said. ?From just about my absolute peak to the absolute rock bottom. To say it?s unexpected would be an understatement.??