The Arizona Cardinals simply haven’t been the same without superstar quarterback Kyler Murray, who missed his second consecutive game in Week 10 with an ankle injury.
Murray, widely regarded as the 2021 NFL MVP front-runner before his injury, suffered a left ankle sprain late in the Cardinals’ Week 8 loss against the Green Bay Packers on Thursday Night Football. 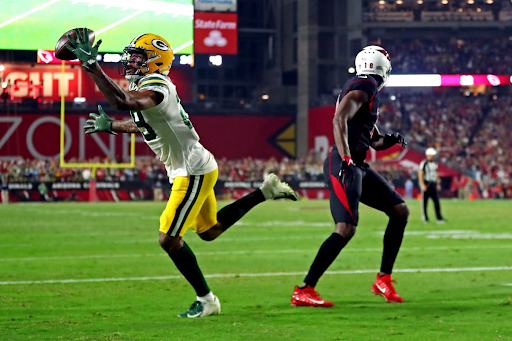 The loss to Green Bay dropped Arizona to 7-1 on the season. But they responded with a surprise 31-17 road victory against the NFC West rival San Francisco 49ers in Week 9, thanks to a gutsy performance from backup quarterback Colt McCoy. Arizona was also missing star wide receiver DeAndre Hopkins,

Entering Week 10, Arizona boasted the NFL’s best record at 8-1. But McCoy was unable to replicate his Week 9 magic, and the Cardinals were no match for the visiting Carolina Panthers in a 34-10 blowout loss.

It doesn’t take much to stress just how much less potent Arizona offense is without Murray. The 2019 first overall pick has averaged 284.5 passing yards per game, and McCoy has only mustered 356 total passing yards over his two starts.

With Murray in the lineup, Arizona has scored over 30 points six times this season.
Murray, Hopkins, Christian Kirk, A.J. Green and James Conner round out a dynamic offense that can compete with the league’s very best. But Arizona will need Murray back at full health if they’re to a) retain their lead in the NFC West and b) stay in the race for the conference top seed and only first-round bye.

Kliff Kingsbury’s group will look to rebound on Sunday when they visit the Seattle Seahawks at Lumen Field (4:25 p.m. EST).

Arizona opens that game as a 2.5-point favorite at most of the Arizona sports betting websites.

Barring a red-hot second half, the Seahawks look poised to suffer their first losing season in the Russell Wilson era, which began in 2012.

Wilson, who never missed a game through his first nine seasons, suffered a middle finger injury on his throwing hand in the Seahawks Week 5 home game against the Los Angeles Rams.
The injury required surgery and kept Wilson out for three games, which prompted head coach Pete Carroll to start Geno Smith instead.

The Seahawks lost their first two games without Wilson and dropped to 2-5, but Smith was able to lead his team to a pivotal 31-7 victory over the Jacksonville Jaguars in Week 8. Seattle now stood at 3-5 heading into the bye week.

But Wilson return in Week 10 against the Packers did nothing to spark the Seattle offense. They were shut out 17-0 at Lambeau Field, as Wilson struggled mightily with two interceptions and a porous 50.0 percent completion percentage.

Wilson injury only kept him out for three games, but it has greatly altered Seattle season. Considering they only lost by three points to the Pittsburgh Steelers and New Orleans Saints in Weeks 6 and 7, respectively, it safe to assume that Seattle would have won those two games with Wilson.

A healthy Wilson could have also helped Seattle get past Los Angeles in Week 5. So instead of potentially sitting at 6-3, Seattle find themselves at 3-6 and last in the NFC West.
If Seattle misses out on the postseason altogether in 2021, Wilson injury that sidelined him for three weeks will go down as one of the more impactful and damaging absences of the season.

Ravens Secondary Losing Form Without Marcus Peters
To say that the Baltimore Ravens defense hasn’t been the same without All-Pro cornerback Marcus Peters would be a massive understatement.

Peters suffered a torn ACL in practice just four days before Baltimore Week 1 road game against the Las Vegas Raiders, which they lost 33-27 in overtime. And though the Ravens are sitting pretty at 6-3 and atop the AFC North, the struggling secondary is a major cause for concern.
Baltimore defense has consistently been one of the NFL best under Don Martindale. But through 10 weeks, the Ravens sit 24th in yards allowed per game, dead last against the pass and in a tie for 22nd in points allowed per game.

Renowned for his ball-hawking skills, Peters had seven interceptions and 19 passes defended over his first two seasons (24 total games) as a Raven. Veteran Anthony Averett (two picks) is the only Raven with multiple interceptions this season.

Baltimore looks poised for a fourth straight playoff berth, but the problems against the pass could very well lead to another early postseason exit. Simply put, Peters value to the Ravens has never been more evident.